Blog
Tim Jackson Photography / Blog / Neist Point is an excellent place to watch the sunset on the Isle of Skye.
Apr 25 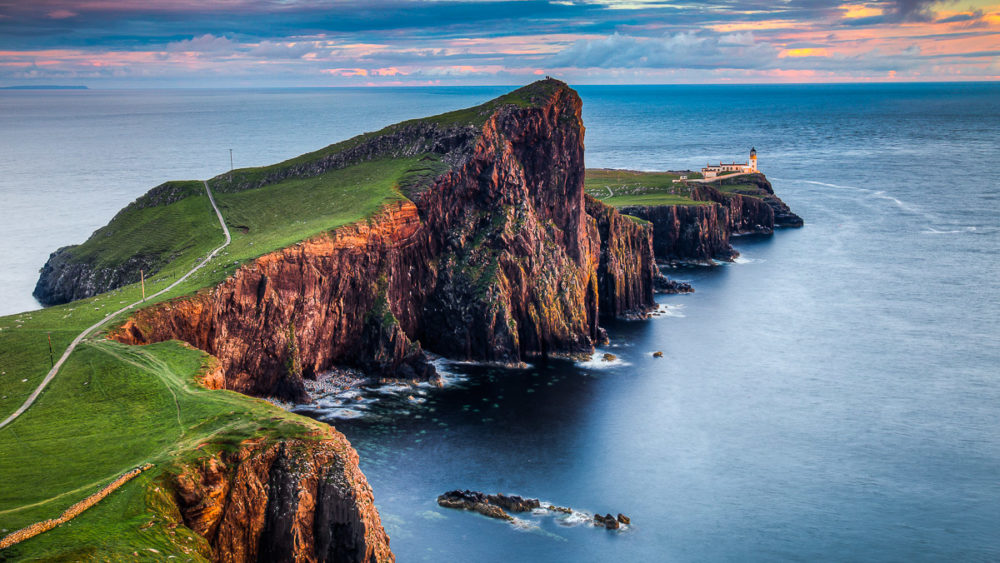 Neist Point is an excellent place to watch the sunset on the Isle of Skye.

Anyone visiting the Isle of Skye should certainly have Neist Point on their list of places to visit while they are there. The lighthouse at Neist Point is one of Scotlands most famous and draws in many visitors each year. I visited this location back in July 2017 on a trip to explore and photograph the Isle of Skye.

From Portree is takes around an hour to travel to 31 miles west across Skye to reach Neist Point. Parking can be tricky due to limited spaces and the sheer popularity; I went on 3 separate occasions and was lucky to find a spot on the road each time; my luck would not end here.

My first visit was to explore the area and look for different vantage points and compositions. This was not planned but with heavy rain over Portree and Sligican I decided to head west to avoid the rain. To my surprise it was hot and sunny when I got there and the sun was far too harsh for photography, so exploring and having a walk was the best alternative. 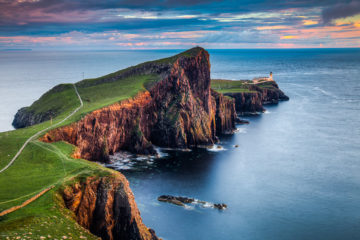 There are lots of interesting viewpoints at Neist Point. From the car park, head along the cliff top to the Neist Point Cliff Lighthouse viewpoint and you will an impressive view of the cliff face and the lighthouse. You can also walk down to the lighthouse via a concrete path and steps, which can be steep in parts.

After a bit of exploring I did a few test shots from the lighthouse viewpoint at the top of the cliff; the conditions weren’t right but it was a good dry run ahead of revisiting at another time of day. My plan was to revisit one evening to capture Neist Point as sunset. The dry run was particularly useful in terms of discovering just how windy it can get on the cliff top, which would rule out any very long exposures.

I drove back to Sligachan and headed out for a walk, as I had originally planned to do in the morning. The weather was glorious and it was a reminder how quickly the weather can go from damp and raining to full sun and blue skies in a short space of time. By late afternoon some cloud had formed and something told me that conditions were looking good for a colourful sunset. Determined not to waste this opportunity, I headed back to Neist Point for the second time in a day.

Arriving in good time I set up in the spot I had found on the clifftop earlier. I knew this was a popular location that sometimes filled up with rows of photographers and their tripods. It was nice that on this occasion there was only one other photographer and a family who had come to sit and admire the view.

There was quite a lot of cloud, particularly on the horizon, which can make or break a sunset depending on where the breaks in the cloud are. I starting capturing a few frames, not particularly happy with the flat light and lack of any warmth in the shots. After 20 minutes the sun dropped below the thicker cloud and gave us a magnificent display of colour. The warm light I had been waiting for hit the cliffs of Neist Point and the lighthouse and lit up the horizon. Not only had I been lucky with the parking twice in one day, but now I had been rewarded with a beautiful sunset. 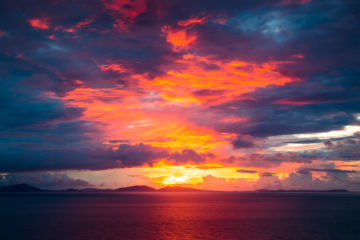 After capturing the shot I wanted of Neist Point at sunset, I turned the camera to face the setting sun, which was going down over the island of North Uist in the outer Hebrides. It was one of those rare sunsets when the sky really did look like it was on fire, as shown in the image to the right. I and the others on the cliff top sat back watched the sun finish setting.I will always remember the moment the colour faded and the Mum of the family sat behind me turned to the children and said “That’s the show over now, time to go.” She was right, and what a show it had been.